Briefly, readers; not like their is an actual war going on there after the "surge."

"2 killed in suicide blast at restaurant

BAGHDAD - A suicide bomber detonated an explosives belt yesterday at a restaurant popular with police in an Iraqi city that was once a flash point for sectarian slaughter, killing at least two people, authorities said. The attack came the same day an Al Qaeda front group in Iraq claimed responsibility for a suicide bombing Tuesday at Baghdad’s main crime lab that killed 22 people.

"Vermont has more deaths per capita in Iraq war than other states" by John Curran, Associated Press | January 27, 2010 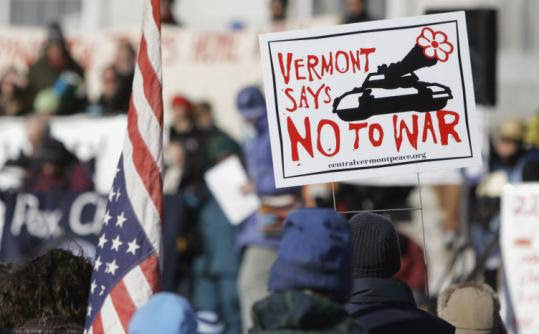 An antiwar protester held a sign during a rally at the State House in Montpelier in February 2006. (Toby Talbot/ Associated Press/ File)

It's a WHOLE LOT MORE of America than JUST THEM, world!!!!

BENNINGTON, Vt. - This state has suffered more deaths per capita in the Iraq war than any other state....

Another factor may be the Vermont GIs’ assignments. Nearly half the 22 killed were members of the Vermont National Guard....

Which means they NEVER SHOULD HAVE BEEN THERE over BUSH'S LIES!!!

The Vermont National Guard is heavy with cavalry and infantry operations and has the US military’s only mountain infantry brigade, specializing in mountaineering and small-unit tactics....

“When Erik died, I just looked at that coffin, and whatever religion I had, I just lost it,’’ said his mother, Dorothy Halvorsen, who was against the US invasion of Iraq and told him so after he was sent there.

Yes, ALL MOTHERS do NOT want their CHILDREN DYING over DAMNABLE LIES!!!

Now she salutes her fallen son by contributing to local peace organizations and gathering with other antiwar activists in an annual vigil timed to mark the anniversary of the war’s start.

We NEED a GENERAL STRIKE and MASSING in CITIES and CAPITALS for AS LONG AS IT TAKES, America!

Vermont is among the bluest of blue states.

And yet IT'S SOLDIERS STILL DIE in WARS BASED on LIES!!!

In an Associated Press exit poll last November, a third of respondents in Vermont described themselves as liberal, while 1 in 5 did so nationally.

The state’s three members of the House and Senate are all war opponents, including Senator Bernie Sanders, the only self-described socialist on Capitol Hill.

Related: The Buying Off of Bernie Sanders

And what does a WAR OPPONENT mean?

I see NO FILIBUSTER of FUNDING!!!

Just ONE of those CUTE POLITICAL TERMS that MEANS NOTHING, huh?

How HUMBLING and EMBARRASSING, New England!!!

Yup, we see where that went. It's 2010 now and those war criminals are walking around free. Heck, Obama won't even investigate Bush's crimes, and is using him to loot Haitian aid!

And Vermont went for Obomber, huh?

Also that year, the towns of Brattleboro and Marlboro voted to seek indictments against Bush and Cheney over the war, and dozens of other towns voted at town meetings for impeachment.

See how our representatives listen to the will of the people, world?

It was up to Welch, I believe is the reps name, to deliver the articles to Congress.

He never did, and he's a DemocraP!

I think they are REALLY ON TO SOMETHING -- but I live in Massachushitts!!
Posted by Rocker at 8:10 AM

Labels: Iraq, MSM
Newer Post Older Post Home
WARNING for European visitors: European Union laws require you to give European Union visitors information about cookies used on your blog. In many cases, these laws also require you to obtain consent. As a courtesy, we have added a notice on your blog to explain Google's use of certain Blogger and Google cookies, including use of Google Analytics and AdSense cookies. You are responsible for confirming this notice actually works for your blog, and that it displays. If you employ other cookies, for example by adding third party features, this notice may not work for you. Learn more about this notice and your responsibilities.
"This site may contain copyrighted material the use of which has not always been specifically authorized by the copyright owner. We are making such material available in our efforts to advance understanding of criminal justice, political, human rights, economic, democracy, scientific, and social justice issues, etc. We believe this constitutes a 'fair use' of any such copyrighted material as provided for in section 107 of the US Copyright Law. In accordance with Title 17 U.S.C. Section 107, the material on this site is distributed without profit to those who have expressed a prior interest in receiving the included information for research and educational purposes. "