I purcha$ed a Globe for fun, readers, and I hope you can understand my decisions on what to cover and what not:

The book tour — and an accompanying publicity blitz of magazine stories, television interviews, and savvy social media — provides a thinly disguised way to put her spin on her four years as secretary of state and spell out her agenda. But the seeming inevitability of her candidacy is creating some angst among Democrats, including Governor Deval Patrick of Massachusetts, who worry that the party will be robbed of a robust primary debate that can help sharpen candidates.

Corporate parties closing themselves off to any threats.

Some Democrats even worry that if she does not run, after all this buildup, the party will be caught without a viable candidate.

Republicans, meanwhile, have the luxury of focusing most of their fire on Hillary Rodham Clinton, hoping to whittle away at her carefully crafted story. GOP operative Karl Rove, who recently made headlines by questioning Clinton’s health, said Monday on Fox News that voters are not looking for someone he described as “old and stale.”

“If it looks like you are the candidate, then people tend to pick at your faults and tend to look at alternatives,” Rove said, demonstrating his theory by picking at what he perceived to be the faults of the 66-year-old Clinton.

He said she might have brain damage. Being around Bush all that time I'm sure he could recognize the symptoms.

"Three months after state regulators allowed a Brookline psychiatric hospital to start accepting new patients again, federal investigators found deficiencies with psychiatric evaluations and treatment plans, problems they said may have hindered patients’ recovery. Yet in February, inspectors for the federal Centers for Medicare & Medicaid Services found serious shortcomings in the quality of treatment at the 66-bed hospital in Brookline. Soon after, Arbour HRI’s chief executive, Patrick Moallemian, left his job. Arbour spokeswoman Judith Merel would not disclose the reason for his departure. Despite the federal findings, she said, patients at the hospital received good treatment. The federal investigators’ report, which Medicare provided to the Globe in response to a public records request, details the latest in a series of problems at Arbour Health System hospitals and clinics resulting from poor training and understaffing."

That is the longterm prognosis.

Clinton, meanwhile, was at the White House on Thursday for lunch with Obama, a meeting that was not on the president’s public schedule and was discovered only after People Magazine, following an interview with Clinton, tweeted a photo of her getting ready for the visit. The White House and Clinton aides did not say what was discussed. 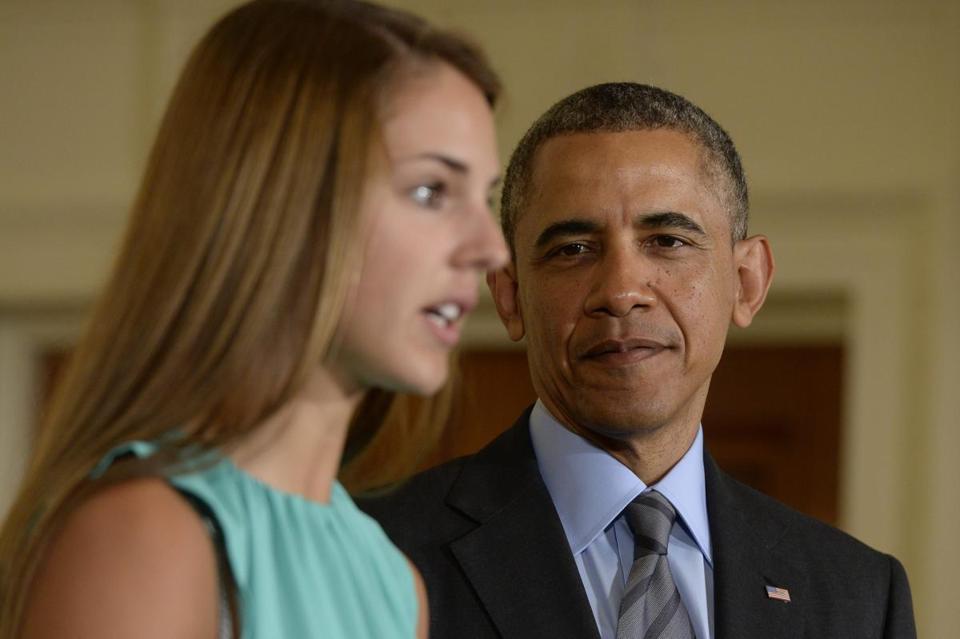 President Obama listens to the story of Victoria Bellucci, who suffered five concussions during her soccer career (michael reynolds/epa).

I'm not liking the look of one of them.

Clinton’s associates and supporters are using this period to accelerate the laying of groundwork for the prospective candidate. Clinton aides on Friday are slated to meet with supporters at the centrist think tank Third Way to talk about several issues, including one of the thorniest for a Clinton campaign: the attack on the US compound in Benghazi, Libya, where four Americans were killed, during Clinton’s tenure as secretary of state.

Ready for Hillary, a political action committee that formed to try to persuade Clinton to run — and, if she does, be ready with a network of supporters — has raised $5.7 million. Some of the top donations come from billionaire George Soros and Marc Benioff, chief executive of cloud computing firm Salesforce.com. Barbara Lee, the Cambridge-based philanthropist, has donated $20,000 to the PAC.

They buy into both parties, and now we know why Georgie Sorrows was withdrawing money from the bank. I smell something rotten.

Several anti-Clinton groups have formed too, most prominently the Stop Hillary PAC, which has raised nearly $500,000.

The book rollout has been carefully orchestrated. For Mother’s Day, an excerpt focused on Clinton’s mother ran in Vogue, and a video on how she wrote the book appeared on People magazine’s website. The publisher released the book’s “author’s note” on Tuesday, and a video appeared on the Facebook page for the book the next day.

Clinton is planning to sit down for an interview with Diane Sawyer of ABC News on June 9 and with Fox News’s Bret Baier and Greta Van Susteren on June 17.

Given her standing as one of the world’s best-known politicians, a former first lady, secretary of state, and senator, and an unsuccessful 2008 presidential candidate — and the author of “Living History” and “It Takes a Village” — it is not clear what new nuggets will be revealed in “Hard Choices.” But her closest associates insist there is more to say beyond what she has written in the two previous major books.

Polls show her in a top position — a new Washington Post-ABC News poll found that 55 percent of those surveyed said they would support Clinton for president in 2016 — but she was considered inevitable in 2007, too, before Barack Obama, then a freshman senator from Illinois, upended her plans.

The publisher, Simon and Schuster, declined to say which stops she will be making on the book tour. A spokesman said she would make a stop in New England but would not say where. Several political observers said she would probably stop in Boston, but predicted she would not wade into New Hampshire.

Even close allies to Senator Jeanne Shaheen, a New Hampshire Democrat and Clinton ally who is running for reelection, were unsure whether Clinton would campaign with her. It is more likely that Bill Clinton would stump with Shaheen, since a Hillary Clinton campaign event would turn into speculation about her presidential aspirations — not Shaheen’s Senate race.

She's no Scott Brown, either.

New Hampshire, in fact, is a microcosm of the reaction among activists around the country to a potential Clinton campaign.

Nothing, of course, is certain. Clinton won the 2008 New Hampshire primary, a victory that at the time was considered vital to her campaign’s effort to blunt some of Obama’s early momentum after he won the Iowa caucuses. The state has also had a long relationship with Bill Clinton, giving him a second-place showing in 1992 that earned him the nickname, “The Comeback Kid.”

The operator of a Dorchester day-care center housed in an apartment building where a 2-year-old boy fell to his death was surrendering her license Thursday as new details emerged showing repeated violations at the facility.

Marisol Rondon-Ramos, who has been licensed to operate a day care since 2006, has been cited three times by the Department of Early Education and Care for enrolling too many children in her program and four times for noncompliance with safe sleep practices, according to the state.

Relatives said toddler Daylan Walker was at Rondon-Ramos’s day care on Wednesday when he fell from the roof of 129-135 Columbia Road. Police said the boy was found on the pavement behind the building just before 10 a.m. and taken to Boston Medical Center, where he was pronounced dead....

That is where I decided to drop that story, bad pun intended in sadness.

I've had enough of liars so we can Hauser that piece.

You can make your pleas and calculate your odds, but those articles are also being left on the cutting room floor. I getting out of the Metro section by rail or road.

I had to scrap the chump change offer on his way out the door because "in some Massachusetts cities, the Great Recession never ended."

That's why I call it the Grand Depression, in $ome ways a gloriou$ thing.

When I get to the business section I can no longer compete. I don't know where to go next. I am using more black pen than red. Google got dumped as I'm done spacing out and too drunk to climb the hill today, and can't for the life of me understand millennials. Better buy a T-bill, check your outfit, and check in at the bank.

Down at the bottom of page B14 I see the caged bird has been muzzled and I'm junking the rest of the articles, sorry. My batteries are running low so I'm going to power down now. Turns out some articles were not hard to scrap at all.

And that is your kiss goodbye (maybe not considering the measles and MERS). Second date was not as much fun.
Posted by Rocker at 8:59 AM

Labels: American Tyranny, Business, Health, MSM, Obama, Politics, State, U.S., Women
Newer Post Older Post Home
WARNING for European visitors: European Union laws require you to give European Union visitors information about cookies used on your blog. In many cases, these laws also require you to obtain consent. As a courtesy, we have added a notice on your blog to explain Google's use of certain Blogger and Google cookies, including use of Google Analytics and AdSense cookies. You are responsible for confirming this notice actually works for your blog, and that it displays. If you employ other cookies, for example by adding third party features, this notice may not work for you. Learn more about this notice and your responsibilities.
"This site may contain copyrighted material the use of which has not always been specifically authorized by the copyright owner. We are making such material available in our efforts to advance understanding of criminal justice, political, human rights, economic, democracy, scientific, and social justice issues, etc. We believe this constitutes a 'fair use' of any such copyrighted material as provided for in section 107 of the US Copyright Law. In accordance with Title 17 U.S.C. Section 107, the material on this site is distributed without profit to those who have expressed a prior interest in receiving the included information for research and educational purposes. "