They joined in after the Washington Post kicked him around a bit.

“I think at some point in this campaign we’ll talk about things like the economy and energy, labor policy, Syria, Iran. I am hoping at some point that mainstream media is able to get around to those topics.’’

Yeah, Mitt, you are really getting bad press.

A day after President Obama became the first holder of the Oval Office to support same-sex marriage, Mitt Romney apologized Thursday for “some dumb things’’ he did in high school after he was accused of bullying a gay schoolmate as a teenager in 1965.

According to a Washington Post report, Romney once led a posse that attacked a boy named John Lauber, who was “perpetually teased for his nonconformity and presumed homosexuality,’’ pinning him to the floor while Romney cut the boy’s bleached-blond hair, which usually draped over one eye.

The Post cited five men who attended the Cranbrook School in Bloomfield Hills, Mich., with the presumptive Republican nominee.

One of the men, Phillip Maxwell, told ABC News that there was no doubt the episode was bullying.

“Oh my god, are you kidding?’’ said Maxwell, now a lawyer who is still friends with Romney. “I castigated myself regularly for not having intervened.

“When I saw the look on his [Lauber’s] face, it was a look I’ll never forget,’’ he said. “This was bullying supreme.’’

Not a good sign considering the last  Republican mass-murderer and torturer that held the office.

In an interview with conservative radio host Brian Kilmeade, Romney said he did not recall such incidents but added, “I participated in a lot of hijinks and pranks in high school and some may have gone too far, and for that I apologize.’’ 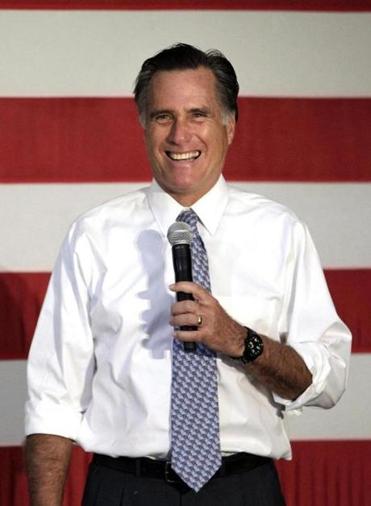 And looking back now I believe I was bullied and a bully back in high school.  It's not an excuse, but peer pressure made me pick on certain people, and perhaps that is what made others pick on me. All I know is it was part of what I thought was growing up. The day I held my own and beat the bully was the day people stopped bothering me. That was after I took my share of ass-whippings.

On the flip side, when the f*** is my nation, the unholy empire of EUSrael, going to stop bullying the planet?

Romney - who as governor of Massachusetts eliminated the Governor’s Commission on Gay and Lesbian Youth, a program designed to end harassment of homosexual teens - insisted that whatever he might have done was not motivated by antigay sentiments. He noted that both Lauber and Hummel were in the closet at the time and said he had “no idea’’ they were gay. The Post said Lauber died in 2004.

In an interview with the Globe, Sidney Barthwell Jr., a Romney classmate who did not participate in the Post report, said friends told him about Lauber’s violent haircut.

The only African-American in the Cranbrook class of 1965, Barthwell said that Romney and his family were known at the time as civil rights proponents. He said that there were several “effeminate’’ students at the all-boys school and that they were sometimes addressed “using terms that would not be politically correct today.’’ But he never heard such language from Romney.

Barthwell said the mistreatment of Lauber was more likely based on his demeanor and hair-do than his sexual orientation.

Schoolmates also told the Post that on more than one occasion Romney humiliated an English teacher by exploiting his near-blindness.

Shows a tendency to torture.

Romney and his backers have responded to the anecdotes with a two-pronged defense: Romney has changed, and decades-old antics have no place in contemporary political discourse.

Weak.  In this day and age of school sensitivity to bullying that just doesn't cut it.

“I am quite a different guy now that I am married, have five sons, five daughters-in-law, and 18 grandchildren,’’ Romney said. “I think at some point in this campaign we’ll talk about things like the economy and energy, labor policy, Syria, Iran. I am hoping at some point that mainstream media is able to get around to those topics.’’

Are you? Is that what all the flip-flopping, disassembling, and I'll-say-whatever-I need-to-whenever-and-wherever-I-have-to-to-become-president is about?

Gay guy got bullied out of Romney's campaign.

Mitt Romney’s foreign policy spokesman, a gay man whose support for same-sex marriage infuriated social conservatives, abruptly resigned on Tuesday, saying the intense focus on his sexual orientation was making it impossible for him to do his job.

Richard A. Grenell, who served as the spokesman for the US mission to the United Nations under George W. Bush, revealed he was leaving less than two weeks after he was hired.


“While I welcomed the challenge to confront President Obama’s foreign policy failures and weak leadership on the world stage, my ability to speak clearly and forcefully on the issues has been greatly diminished by the hyper-partisan discussion of personal issues that sometimes comes from a presidential campaign,’’ Grenell said in a statement. “I want to thank Governor Romney for his belief in me and my abilities and his clear message to me that being openly gay was a nonissue for him and his team.’’

The Romney campaign had said Grenell was hired because of his experience serving under John R. Bolton and three other ambassadors to the United Nations. But critics on the right expressed outrage that Romney would hire a gay man and a supporter of same-sex marriage....

Yeah, Romney has been endorsed by the Bush crime family and has loaded up on neo-con advisers.

Grenell had also been criticized for cutting comments he had written on Twitter weeks ago about Rachel Maddow, the MSNBC host, and Callista Gingrich, wife of rival candidate Newt Gingrich.

The gay dude who got bullied out was bullying a gay girl and Gingrich's latest wife?

Will the hypocrisy ever end here in AmeriKa?

“Essentially, he was hounded by the far right and the left,’’ said R. Clarke Cooper, executive director of the Log Cabin Republicans [and] a former counselor to the American Mission to the United Nations, who served with Grenell in the Bush administration.

Well, at least they finally came together on something, right?

“It’s unfortunate and it’s disappointing,’’ Cooper said. “The Romney campaign has lost a very well-respected advocate in the conservative community and a very talented spokesman. This guy is immensely qualified.’’

The Obama campaign pounced on Grenell’s decision, accusing Romney of caving to extremists in the Republican Party.

“Today we learned that in the year 2012, a Republican nominee for president can’t have a gay person as spokesman,’’ Teddy Goff, the Obama campaign’s digital director, wrote on Twitter.

I care about the lies spewing forth from said mouth, not it's race, gender, or sexual preference.  Sorry.

Also see: The Boston Globe's Invisible Ink: She's No Princess
Posted by Rocker at 5:02 AM

Labels: MSM, Politics, U.S.
Newer Post Older Post Home
WARNING for European visitors: European Union laws require you to give European Union visitors information about cookies used on your blog. In many cases, these laws also require you to obtain consent. As a courtesy, we have added a notice on your blog to explain Google's use of certain Blogger and Google cookies, including use of Google Analytics and AdSense cookies. You are responsible for confirming this notice actually works for your blog, and that it displays. If you employ other cookies, for example by adding third party features, this notice may not work for you. Learn more about this notice and your responsibilities.
"This site may contain copyrighted material the use of which has not always been specifically authorized by the copyright owner. We are making such material available in our efforts to advance understanding of criminal justice, political, human rights, economic, democracy, scientific, and social justice issues, etc. We believe this constitutes a 'fair use' of any such copyrighted material as provided for in section 107 of the US Copyright Law. In accordance with Title 17 U.S.C. Section 107, the material on this site is distributed without profit to those who have expressed a prior interest in receiving the included information for research and educational purposes. "