The most vile group I've ever seen.

Oh, yeah, they really look like they are hurting. 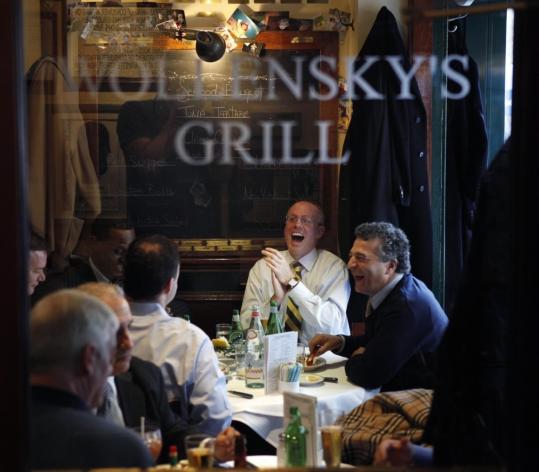 Diners ate lunch yesterday at Smith & Wollensky in New York. “They are taking away the pot of cash, and without that cash, there can’t be a trickle-down effect,’’ said owner Alan Stillman. (Seth Wenig/Associated Press)

NEW YORK - Big bonuses are back on Wall Street, but that does not mean everybody’s driving a new Ferrari.

This year, companies are giving out more of the rewards in stock that cannot be redeemed for years, limiting the economic benefits for businesses that cater to the masters of the universe.

Oh, that is SUCH an ELITIST and SELF-ADULATING TERM it MAKES ONE SICK!

How massa doin' with no head, huh?

Whether they sell $5 million condos or $50 steaks, those businesses are bracing for a winter without the typical bonus rush. “They are taking away the pot of cash, and without that cash, there can’t be a trickle-down effect,’’ said Alan Stillman, owner of the New York steakhouse Smith & Wollensky. “Everyone feels it. The taxi drivers, doormen, waiters, everyone.’’

Hey, you AIN'T BEING PISSED ON by the RICH this year, slaves!!

Make sure you shake after the trickle!

With banks making billions again, they are set to pay near-record bonuses for 2009.

Well, NOT EVERYONE is "feeling it," are they, America.

And that is why I'm sick of business bulls*** in my Boston Globe.

Just yesterday, Goldman Sachs said it rewarded employees with $16.2 billion in salary and bonuses for the year, up almost 50 percent from the year before.

Yeah, but the POOR DEARS are taking a cut(?).

But those same firms are bowing to political and public pressure and paying more of the bonuses in stock that cannot be redeemed right away....

Yeah, they are bowing to public pressure by changing the name of the loot they are stealing.

Besides, after what they have done, nothing can redeem them other a room with a revolver and one ceremonial bullet.

Want to talk a walk, readers, while leaving the banker in the room by himself?

Yeah, NOTHING can redeem THESE SCUM!!!!

The big bank said yesterday that it rewarded employees with $16.2 billion in salaries and bonuses for 2009. That’s up 47 percent from the previous year but much lower than many expected.

So we are being told they are REIGNING IN BONUSES, etc, when they have INCREASED to RECORDS!!! But because it is NOT AS MUCH of a LOOTING, they GOT the MESSAGE?! I DON'T THINK THEY DID!!!!

In all, compensation accounted for 36 percent of Goldman’s $45.17 billion in 2009 revenue, the lowest annual ratio since the company went public in 1999. In 2008, Goldman set aside 48 percent of its revenue to pay employees....

Hey, HOW did YOU DO this year, America? Record foreclosures and job losses, right? But at least BAILED OUT BANKS made it BIG, huh?

The $4.79 billion profit was the biggest quarterly gain ever for the New York-based bank. The previous record was $3.16 billion in the fourth quarter of 2007, as the bull market on Wall Street was peaking. Trading of fixed income, commodities, and currencies buoyed Goldman’s profits for the third straight quarter. The bank also reported higher fees from underwriting stock and debt offerings....

They just CLEANED RIGHT UP, huh?

And all those executive branch officials and advisers having come from there, too!

Goldman, which has long outperformed other financial companies, has been the strongest bank throughout the financial crisis. It had less exposure to toxic mortgage-backed securities than other companies and also has been more aggressive in its trading....

That's because they BET AGAINST the SHIT they were SELLING OTHERS and telling them it was GOLD!

"Goldman's "secret" isn't a secret at all. Their program trading system, dragged into the light by the arrest of a former programmer, churns the market constantly, capturing a few dollars here and there as the price of targeted stocks fluctuates, raking in $100 million a day for which nothing of value is given back. It is legalized looting on a scale that makes Bernie Madoff's scams look like stealing a few coins from the collection plate. And all of this is paid for by the traders who are not allowed to use programs, the investors who get to the trade windows a second later than Goldman Sachs, and of course, the actual companies being traded." -- Wake the Flock Up "

Gee, and now we find out that Goldman Sachs has been neck deep in every ugly financial meltdown in the over the last hundred years-- and PROFITED FROM IT!!!

They just CROW about HOW GREAT the WIZARDS at Goldmans are!

Not as smart at Wells Fargo or BoA:

And yet they HANDED OUT BONUSES!!!

Ongoing problems including the deteriorating commercial real estate market and rising credit card defaults could still trip up a recovery.

And while Wells’ profit report was good news, the bank is ahead of its competitors by having already taken losses on many of its bad loans....

Adam Barkstrom, a managing director at Sterne Agee, shared the skepticism over Wells’ forecast of an economic recovery, saying: “I think it’s still too early to make that prediction.’’ He said the bank is still highly exposed to risky mortgage markets like Florida and California. It has also restructured many troubled mortgages, which could mean the bank is “just kicking the can down the road’’ if those borrowers still can’t pay their bills.

Other analysts aren’t so pessimistic....

Why do I smell a LIE, folks?

And I guess the MSM thinks if they repeat the lie often enough you won't smell the s***.

NEW YORK - Goldman Sachs, Morgan Stanley, and JPMorgan Chase’s investment bank slashed their compensation in the fourth quarter, responding to political pressure that will probably persist as details of bonuses for their top executives emerge in coming weeks.

The three Wall Street firms set aside $39.9 billion for pay in 2009, below the 2007 record of $44.7 billion. The total fell short of the $46.1 billion five analysts expected this month and is almost $10 billion less than what some analysts estimated in October.

“There’s no question that Wall Street got the message from Washington,’’ said Michael Robinson, a senior vice president of Levick Strategic Communications and former head of public affairs at the Securities and Exchange Commission. “But positioning the big banks with big bonuses as the bad guys has played well for politicians, and they are likely going to keep coming back to it. To some extent, banks are just going to have to be prepared for that.’’

Pfft! How do you like your s*** fooley MSM sandwich?

Banks are disclosing stock awards handed out to top executives in the next few weeks....

At Goldman Sachs, Morgan Stanley, and JPMorgan’s investment bank, all based in New York, pay expenses equate to about $24 billion in bonuses, based on pay consultant Options Group’s estimate that year-end awards account for 60 percent of total compensation costs. While that would be an increase of 29 percent from the estimated levels of a year ago, it’s below the estimated payout for 2007.

How did you do this year, America?

Goldman Sachs subtracted $519 million from its compensation pool in the fourth quarter and made $500 million in charitable donations....

Goldman Sachs’s decision reflected “management buckling to media/Washington pressure on pay,’’ Macquarie Group analyst David Trone wrote in a note to investors. “Paying out at a 36 percent rate is unlikely to be attempted two years in a row, lest the company see an outflow of talent and its franchise destroyed.’’

And GOOD RIDDANCE, too!

David Viniar, chief financial officer for Goldman Sachs, said the firm tried to “balance the needs of the public versus being fair to our people’’ on compensation, and he doesn’t expect many employees to leave in protest about the pay cuts.

Yeah, they are STILL HANDING OUT RECORD BONUSES but it's a "CUT," yup!

Yeah, you SEE WHO WON that "balancing act," don't you?

Labels: American Tyranny, Business, Politics, U.S.
Newer Post Older Post Home
WARNING for European visitors: European Union laws require you to give European Union visitors information about cookies used on your blog. In many cases, these laws also require you to obtain consent. As a courtesy, we have added a notice on your blog to explain Google's use of certain Blogger and Google cookies, including use of Google Analytics and AdSense cookies. You are responsible for confirming this notice actually works for your blog, and that it displays. If you employ other cookies, for example by adding third party features, this notice may not work for you. Learn more about this notice and your responsibilities.
"This site may contain copyrighted material the use of which has not always been specifically authorized by the copyright owner. We are making such material available in our efforts to advance understanding of criminal justice, political, human rights, economic, democracy, scientific, and social justice issues, etc. We believe this constitutes a 'fair use' of any such copyrighted material as provided for in section 107 of the US Copyright Law. In accordance with Title 17 U.S.C. Section 107, the material on this site is distributed without profit to those who have expressed a prior interest in receiving the included information for research and educational purposes. "