Catching a Tiger by the Tail in Indonesia 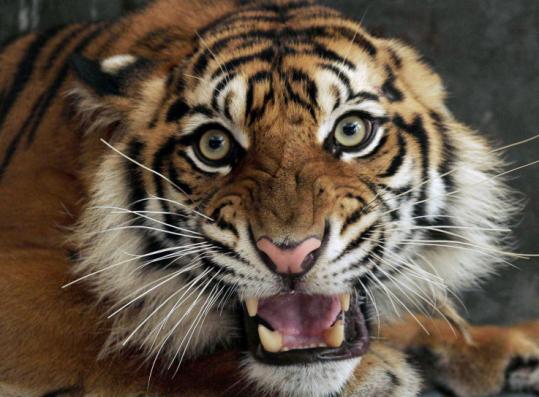 A Sumatran tiger awaited surgery for injuries it received when it was caught in a snare. It died Monday before being treated. (AP Photo/ Heri Juanda)

KATMANDU, Nepal - The world’s tiger population is declining fast despite efforts to save them, and new strategies are urgently needed to keep the species from dying out, international wildlife specialists said yesterday....

An estimated 3,500 to 4,000 tigers now roam the world’s forests, down from the more than 100,000 estimated at the beginning of the 20th century. All the remaining tigers are in Asia. Participants at the conference, which also includes the World Bank, the World Wildlife Fund, and other groups, plan to discuss strategies for tiger conservation....

What business does the WORLD BANK have in PROTECTING TIGERS?

And if they couldn't protect them for the 100+ years they have been running the planet, why should we trust them to "preserve" it now?

In a recent case, a Sumatran tiger died after being caught in a pig snare last week in Indonesia, the country’s news agency, Antara, reported Monday.

It AMAZES me how QUICKLY the earthquakes, landslides, and floods were FORGOTTEN by the MSM!

Oh, things are returning to normal, are they?

The report said the tiger died as it was being prepared for surgery Monday. Only about 250 Sumatran tigers remain in the wild. “Despite our efforts in the last three decades, tigers still face threats of survival. The primary threat is from poaching and habitat loss,’’ Nepal’s prime minister, Madhav Kumar Nepal, told the conference. He said extreme poverty has also challenged efforts....

I don't get it; banks don't seem to be too poor right now.

Labels: Animal Cruelty, Environment, Indonesia, MSM, South Asia
Newer Post Older Post Home
WARNING for European visitors: European Union laws require you to give European Union visitors information about cookies used on your blog. In many cases, these laws also require you to obtain consent. As a courtesy, we have added a notice on your blog to explain Google's use of certain Blogger and Google cookies, including use of Google Analytics and AdSense cookies. You are responsible for confirming this notice actually works for your blog, and that it displays. If you employ other cookies, for example by adding third party features, this notice may not work for you. Learn more about this notice and your responsibilities.
"This site may contain copyrighted material the use of which has not always been specifically authorized by the copyright owner. We are making such material available in our efforts to advance understanding of criminal justice, political, human rights, economic, democracy, scientific, and social justice issues, etc. We believe this constitutes a 'fair use' of any such copyrighted material as provided for in section 107 of the US Copyright Law. In accordance with Title 17 U.S.C. Section 107, the material on this site is distributed without profit to those who have expressed a prior interest in receiving the included information for research and educational purposes. "