The Plight of the Pashtuns

I did report on this yesterday; strange how when PEACE TALKS break out SOMETHING UNUSUAL just seems to HAPPEN, isn't it?

Anybody hear a HAARP?

Timing is AWFULLY ODD, isn't it?

ISLAMABAD, Pakistan - Rescue teams and family members searched frantically for survivors late yesterday in a string of villages in southwestern Pakistan where at least 170 people were killed by a powerful earthquake.

Thousands of people were left homeless by the predawn temblor in the rural area, where many residents live in mud-brick homes that collapsed in the magnitude 6.4 quake. Authorities said the death toll could rise as rescuers make their way to remote villages that had been cut off by landslides.

Even in good conditions, roads in the area are primitive. Pakistani army helicopters and cargo planes were ferrying in emergency aid, including food, tents and blankets. Medical teams were converging on the scene near the border with Afghanistan, but help arrived too late for some.

President Asif Ali Zardari ordered the national and provincial governments as well as the army to swiftly provide all necessary aid. The tremor was yet another challenge for his young government, which is struggling with a flagging economy, repeated clashes with insurgents in the border region, and conflicts with its American allies over US strikes into Pakistani territory.

Again, the TIMING is so ODD!!!

And WHO wants to get into Pakistan with its army, readers?

And who was told no? I hear strings being plucked, readers.

The quake was centered about 50 miles northeast of the city of Quetta, the capital of Pakistan's impoverished Baluchistan province. With the chill of winter setting in, many of the survivors lost everything, including warm clothing.

Yeah, yeah, I know Balochs are not the same as Pashtuns, but they are ALL HUMAN BEINGS UNDER ATTACK!!!!

And, OH the SUFFERING!! Can you IMAGINE, America?

The area was rocked by a magnitude 6.2 aftershock yesterday evening, terrifying thousands of people who were preparing to spend a freezing night in the open.

In some of the hardest-hit villages in Zirat and Pishin districts, entire families were buried in the ruins, and survivors were digging mass graves, using whatever implements they could find. Small local hospitals and clinics were inundated with injured people, some of whom had to endure a bumpy road trip to Quetta for treatment. --more--"

Oh, I can hardly take much more! 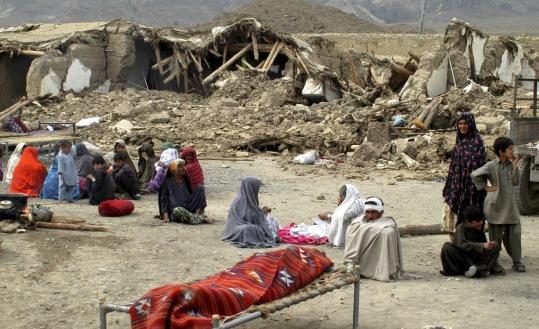 A Pakistani villager (sitting at center right) looked at the body of a family member killed by yesterday's magnitude 6.4 earthquake as others sat in front of their ravaged homes in Ziarat. (Arshad Butt/Associated Press)

Good Lord!!!! Those WOMEN and CHILDREN I SEE? Is it not BAD ENOUGH that these people must be annihilated by U.S. missile attacks, but NOW THIS SUFFERING?!!!

Oh, my heart can hardly bear it anymore!

PESHAWAR, Pakistan - The Pakistani government lodged a formal protest yesterday against American missile attacks on the Taliban and Al Qaeda in the nation's tribal areas and told the American ambassador the strikes should be "stopped immediately," the Foreign Ministry said.

That's because the government of Pakistan values the $10 BILLION in U.S. AID more than they value their OWN PEOPLES' LIVES!!!!

Ambassador Anne Patterson was summoned to the ministry two days after a missile strike by a drone aircraft in South Waziristan killed 20 people. In response to the opposition to the missile strikes, the government has taken several steps in the last week to show its sensitivity to the public hostility.

Yeah, by tossing bullshit fooleys in front of them!

A two-week, on-and-off parliamentary debate on how to tackle terrorism resulted in a broad resolution last Thursday that called for talks with militants who renounced violence. The resolution also said the Pakistani army, which is fighting the militants in the Bajaur region of the tribal area, should withdraw as soon as possible, and be replaced by civilian law enforcement agencies.

On Tuesday, Afghan and Pakistani leaders pledged to seek talks with Taliban forces who lay down their weapons. In contrast to the calls for talks, the Bush administration has stepped up the missile strikes from the Predator pilotless aircraft. --more--"

Yeah, EVERYONE is talking PEACE -- EXCEPT for the U.S.!!

WASHINGTON (AP) — Military planners now think they may need to send more than double the number of extra troops initially believed needed to help fight the war in Afghanistan.

The buildup in the increasingly violent campaign could amount to more than 20,000 troops rather than the originally planned 10,000, two senior defense officials said Wednesday on condition of anonymity because no new figures have been approved.

They would be helicopter units, intelligence teams, engineers to build more bases, medical teams and others.

Translation: We are NEVER LEAVING Afghanistan, either.

Commanders in Afghanistan do not consider this a short-term surge in troops but rather the number that will be needed over a longer period, one official said. --more--"

Nope! And how come THAT isn't in my WAR DAILY, readers?

The sad thing is, the "SURGE" into AFGHANISTAN is going to happen whether it is Obama or McCain.

"The U.S. government was well aware of the Taliban's reactionary program, yet it chose to back their rise to power in the mid-1990s. The creation of the Taliban was "actively encouraged by the ISI and the CIA," according to Selig Harrison, an expert on U.S. relations with Asia. "The United States encouraged Saudi Arabia and Pakistan to support the Taliban, certainly right up to their advance on Kabul," adds respected journalist Ahmed Rashid. When the Taliban took power, State Department spokesperson Glyn Davies said that he saw "nothing objectionable" in the Taliban's plans to impose strict Islamic law, and Senator Hank Brown, chair of the Senate Foreign Relations Subcommittee on the Near East and South Asia, welcomed the new regime: "The good part of what has happened is that one of the factions at last seems capable of developing a new government in Afghanistan." "The Taliban will probably develop like the Saudis. There will be Aramco [the consortium of oil companies that controlled Saudi oil], pipelines, an emir, no parliament and lots of Sharia law. We can live with that," said another U.S. diplomat in 1997."

So why did we kill so many of them, readers?

I would just like to remind you, readers, and the world that LAYING BOMBS on their HOMES and FAMILIES, the littering of DU munitions, the secret prisons, the torture, the families displaced, the lives shattered, the chemicals dumped on them, all based on a BUNCH of LIES!!!

Whatever you think of the "Taliban," they NEVER DID ANYTHING TO US!!!!

We ALL KNOW WHO REALLY DID that BLACK-BAG INSIDE JOB of 9/11, and it wasn't the tribals running around the hills avoiding US and NATO air bombs and artillery batteries!!!!
Posted by Rocker at 11:26 AM

Labels: Afghanistan, Draft, Environment, Neo-Con Plan, Pakistan
Newer Post Older Post Home
WARNING for European visitors: European Union laws require you to give European Union visitors information about cookies used on your blog. In many cases, these laws also require you to obtain consent. As a courtesy, we have added a notice on your blog to explain Google's use of certain Blogger and Google cookies, including use of Google Analytics and AdSense cookies. You are responsible for confirming this notice actually works for your blog, and that it displays. If you employ other cookies, for example by adding third party features, this notice may not work for you. Learn more about this notice and your responsibilities.
"This site may contain copyrighted material the use of which has not always been specifically authorized by the copyright owner. We are making such material available in our efforts to advance understanding of criminal justice, political, human rights, economic, democracy, scientific, and social justice issues, etc. We believe this constitutes a 'fair use' of any such copyrighted material as provided for in section 107 of the US Copyright Law. In accordance with Title 17 U.S.C. Section 107, the material on this site is distributed without profit to those who have expressed a prior interest in receiving the included information for research and educational purposes. "