What an embarrassment this woman is to our nation, America.

Could he have picked a worse "diplomat?"

PARIS - Secretary of State Hillary Rodham Clinton called on China yesterday to overlook its short-term interest in Iranian oil and consider the long-term implications of a Persian Gulf arms race as it decides whether to support stepped-up international sanctions against Iran.

WTF does she think we are doing invading and threatening people?

“As we move away from the engagement track, which has not produced the results that some had hoped for, and move forward toward the pressure and sanctions track’’ in efforts to stop Iran’s nuclear program, Clinton said, “China will be under a lot of pressure to recognize the destabilizing impact that a nuclear-armed Iran would have in the Gulf, from which they receive a significant percentage of their oil supplies.’’

I wish she would shut up.

“It will produce an arms race,’’ she said she had told China. “Israel will feel an existential threat. All of that is incredibly dangerous.”

“We understand that right now it seems counterproductive to you to sanction a country from which you get so much of the natural resources your growing economy needs,’’ Clinton said. “But think about the long-term implications.’’

What, is she TRYING to START a WAR with China?

Clinton’s statement, made at the end of a speech praising US-European security cooperation at France’s Ecole Militaire, the country’s war college for senior officers, echoed what Obama administration officials have privately told China - including in a direct appeal from President Obama to Chinese President Hu Jintao. But it marks the most direct public description of the US case, made with increasing urgency - and little apparent effect - as the administration tries to persuade China to back a new round of sanctions against Iran that it hopes to propose to the UN Security Council next month.

So WHEN does the ATTACK on IRAN begin?

The administration has warned that Israel, which has an undeclared nuclear arsenal, may make good on its threat to take military action against Iranian enrichment facilities, and spur Arab Gulf states to proceed with their own weapons programs.

And I EXPECT U.N. and WORLD CONDEMNATION when they do, right?!!!

Especially since IRAN is NOT BUILDING a BOMB!!!!

Clinton aides reported no breakthrough during a 45-minute meeting she held Thursday with Chinese Foreign Minister Yang Jiechi outside a daylong international conference on Afghanistan.

She sure is getting around, isn't she? Thanks for the carbon footprint.

Russia, which has resisted sanctions in the past, has indicated its own patience with the Tehran government is reaching an end.

So says the wistful and wishful agenda-pushing newspaper.

Officials said they anticipated growing tensions if every nation but China involved in negotiating on Iran decides it’s time to move forward on sanctions. In the past, China has often taken its lead from Russia....

Yeah, and they are in this together. They recognize the threat of USrael.

US business leaders have said that additional sanctions would hurt the US economy and endanger American competitiveness.

Which PROVES THIS GOVERNMENT works for the Zionist ISRAELI JEW!

Update US speeds deployment of missile defenses to Gulf 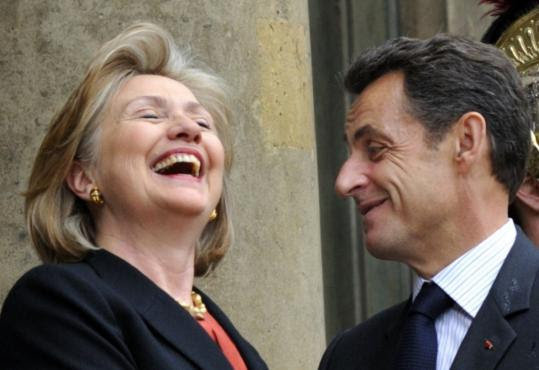 And here is another thing guaranteed to piss off China:

WASHINGTON - In a move sure to aggravate China, the Obama administration yesterday announced plans for more than $6 billion in arms sales to Taiwan, the self-governing island the Chinese claim as their own.


Perhaps you should see this before going any further: Chinese Cold War Coming

The sale would include Black Hawk helicopters, Patriot missiles, mine-hunting ships, and information technology.... Taiwan is the most sensitive matter in already-tense relations between the United States and China, two powers increasingly linked by security and economic issues. The sale could spark a temporary break in US-China military ties.

Yeah, so WHY STIR IT UP? "Defense" dough?

The United States, which only told China of the sale hours before the announcement, acknowledged yesterday that Beijing may retaliate by cutting off military talks with Washington, which happened after a multibillion dollar US sale to Taiwan in 2008.

Yup, a SIGN of DISRESPECT -- as if we could slide it by them without notice, 'ey?

Wang Baodong, a spokesman for the Chinese Embassy in Washington, said Beijing will lodge a formal protest against the US decision. Asked if China would cut off military ties, he said, “Let’s wait and see.’’

Update: Military ties with US cut over Taiwan

President Obama’s national security adviser, Jim Jones, said yesterday that Washington and Beijing both do things “periodically that may not make everybody completely happy.’’ But Jones told an audience at the Center for Strategic and International Studies think tank the United States is “bent toward a new relationship with China as a rising power in the world.’’

China vehemently opposes US arms sales to Taiwan. It has threatened to invade Taiwan should the island ever formalize its de facto independence.

Meanwhile, according to my link and the previous MSM articles, the Chinese peace train is pulling in fast to Taiwan station! WTF, readers?

The United States is Taiwan’s most important ally and largest arms supplier.

And we are LOSING INFLUENCE!!!!

The package, posted on a Pentagon website, dodges one thorny issue: The F-16 fighter jets that Taiwan covets are not included. The sale satisfies parts of an $11 billion arms package originally pledged to Taiwan by former President George W. Bush in 2001, which has been provided in stages because of political and budgetary considerations in Taiwan and the United States. The arms sale will test the Obama administration’s China policy, which US officials say is meant to improve trust between the countries.

This didn't help the trust, Obomber!

Labels: China, Neo-Con Plan, U.S.
Newer Post Older Post Home
WARNING for European visitors: European Union laws require you to give European Union visitors information about cookies used on your blog. In many cases, these laws also require you to obtain consent. As a courtesy, we have added a notice on your blog to explain Google's use of certain Blogger and Google cookies, including use of Google Analytics and AdSense cookies. You are responsible for confirming this notice actually works for your blog, and that it displays. If you employ other cookies, for example by adding third party features, this notice may not work for you. Learn more about this notice and your responsibilities.
"This site may contain copyrighted material the use of which has not always been specifically authorized by the copyright owner. We are making such material available in our efforts to advance understanding of criminal justice, political, human rights, economic, democracy, scientific, and social justice issues, etc. We believe this constitutes a 'fair use' of any such copyrighted material as provided for in section 107 of the US Copyright Law. In accordance with Title 17 U.S.C. Section 107, the material on this site is distributed without profit to those who have expressed a prior interest in receiving the included information for research and educational purposes. "