Under the French Veil

Related: Making a Mountain Out of a Molehill in Muslim France

"French to call for veil ban in public buildings" by Associated Press | January 26, 2010 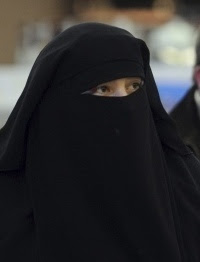 A tiny minority of Muslims wear veils in France.

So then WHY they making such a BIG DEAL OUT of IT!

Maybe they should be wearing the gowns and veil, huh?

PARIS - A French parliamentary panel will recommend a ban on face-covering Muslim veils in public areas from hospitals to schools but will stop short of pressing for the garb to be outlawed on the street, the panel’s president says.

The 32-member panel’s report due today culminates a six-month inquiry into the wearing of all-encompassing veils that began after President Nicolas Sarkozy said in June that they are not welcome on French territory.

And YOUR MASS-MURDERING TROOPS are NOT WELCOME in THEIR LANDS, how about that, asshole?

Andre Gerin, a Communist lawmaker who heads the multiparty panel, stressed the need to move progressively toward a law banning the attire in the streets and to work hand in hand with Muslim leaders and associations.

Oh, great, a COMMUNIST was IN CHARGE of the committee!!!!

All the MORE REASON to REJECT THEM!

Critics of the veils call them a gateway to extremism, an insult to gender equality, and an offense to France’s secular system....

Yeah, but DROPPING BOMBS on their heads and SEPARATING THEM from their FAMILIES FOREVER is LIBERATION!!!

F*** the FRENCH and their XENOPHOBIC CHUTZPAH!!!!

All for a TINY MINORITY, 'eh?

A leader of the panel predicts such a ban by year’s end. As envisaged by the 32-member multiparty panel, a woman seeking unemployment benefits or other state aid, for instance, would walk away empty-handed if she refused to uncover her face.

She would also be denied entrance to the local town hall, the bus, the Metro, and the university classroom. A panoply of recommendations aimed at dissuading Muslim women from hiding their faces is contained in the report, which was drawn up after six months of hearings from specialists, Muslim leaders, and others.

Of course, HIDING MASS-MURDERING WARS based on UNHOLY LIES is JUST FINE with the newspaper! Hell, they HELPED SPREAD 'EM and are STILL DOING SO!

One of the other recommendations: denying resident cards and citizenship to women who wear all-encompassing veils....

Where are the immigration advocates of amnesty, 'eh, MSM?

President Nicolas Sarkozy put the issue before the French in June when he told a joint gathering of Parliament that face-covering veils “are not welcome’’ in France. Only several thousand women in France are thought to wear burka-style garments, usually pinning a “niqab’’ across their faces to go with their long, dark robes. Such veils are widely seen as a gateway to extremism and an attack on gender equality and secularism, a basic value of modern-day France.

And the MSM sure kept this under wraps here:

The judgment, barring appeals, brought an end to several years of high drama involving accusations of skullduggery in the gilded salons of Paris politics, fictitious bank accounts forged by an accountant who wanted to be a spy, and a gullible aerospace executive with ties to French intelligence....

Oh, THAT PART was LEFT OUT of the FOLLOW-UP, huh, MSM?

Labels: France, Islam, Women
Newer Post Older Post Home
WARNING for European visitors: European Union laws require you to give European Union visitors information about cookies used on your blog. In many cases, these laws also require you to obtain consent. As a courtesy, we have added a notice on your blog to explain Google's use of certain Blogger and Google cookies, including use of Google Analytics and AdSense cookies. You are responsible for confirming this notice actually works for your blog, and that it displays. If you employ other cookies, for example by adding third party features, this notice may not work for you. Learn more about this notice and your responsibilities.
"This site may contain copyrighted material the use of which has not always been specifically authorized by the copyright owner. We are making such material available in our efforts to advance understanding of criminal justice, political, human rights, economic, democracy, scientific, and social justice issues, etc. We believe this constitutes a 'fair use' of any such copyrighted material as provided for in section 107 of the US Copyright Law. In accordance with Title 17 U.S.C. Section 107, the material on this site is distributed without profit to those who have expressed a prior interest in receiving the included information for research and educational purposes. "