Seeing as we are on the subject of ignored black people in my Zionist AmeriKan MSM.

The Slow and Silent Starvation of Somalia

One wonders why they even bothered today. 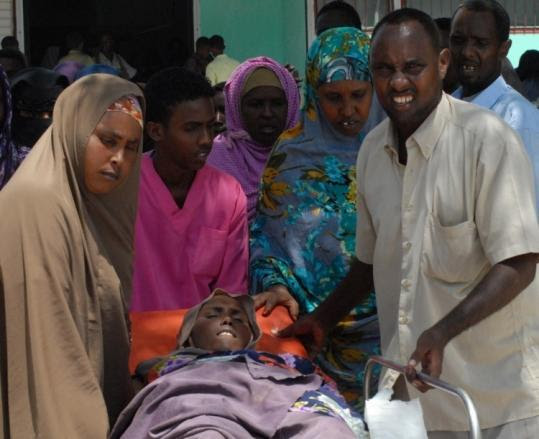 A civilian was taken to Medina Hospital in Mogadishu, Somalia, after suffering injuries during fighting yesterday. (Farah Abdi Warsameh/Associated Press)

Aren't they some of the most beautiful people you ever saw?

HARGEISA, Somalia - Islamist insurgents launched multiple attacks on government bases and African Union peacekeeping troops yesterday and at least 19 people, including women and children, were killed in the heaviest fighting seen in Somalia’s capital in months.

The battle occurred two days before President Sheik Sharif Sheik Ahmed marks his first year in power and underscored that his goal of ending violence in a nation shattered by nearly two decades of war remains as elusive as ever. More than 30 people were wounded in the hourslong fighting, said Ali Muse, the head of the ambulance service in Mogadishu.

Residents cowered in their homes, unable to venture out as the warring sides pounded one another with artillery, mortars, and machine guns. Sheik Ali Mohamud Rage, a spokesman for the insurgent al-Shabab group, said the early morning attacks were aimed at preempting an anticipated offensive against the Islamist militia, which controls much of southern regions, most of the capital, and some central regions.

Oh, so now the "terrorists' have adopted the doctrines of George W. Bush, 'ey?

When Ahmed was sworn in on Jan. 31, 2009, world leaders touted his government as the best option for Somalia. At the time, Ahmed was coleader of an Islamic insurgency and there was hope he and his supporters would be able to draw in more of the Islamists and help stabilize the capital, which has been the epicenter of the Somali conflict.

Interesting how the population was behind him and the Islamists -- including the women -- and then the "terrorists' split off, huh?

Foreign governments in April pledged more than $250 million in money and resources for Somalia’s fledgling security forces, but only a third has been delivered.

I guess if you are a black person (or anyone other than a you-know-who), you get f***ed on aid.

Ahmed has been unable to ride a groundswell of support to put pressure on the insurgents and hasn’t established a national security force capable of defeating them, analysts say.

Al-Shabab, which the State Department has designated as a terrorist organization with links to Al Qaeda, and its Islamic Party ally strike government forces and installations and African Union bases almost at will.

How tragic and sad that a child's obituary carries more truth than a news article.

NAIROBI - A Somali boy who was horribly disfigured months ago by a stray bullet in Somalia’s violent capital has died just days after undergoing reconstructive surgery in neighboring Kenya, his doctors said Thursday.

The plight of 8-year-old Ahmed Mohamed Mohamoud was reported by the Associated Press in November in an article, photos, and video, two months after he was shot in Mogadishu. Ahmed personified the civilian toll in the brutal conflict in Somalia and drew offers of aid from around the world. The bullet tore through his cheekbones, nose, and mouth and destroyed his right eye. Dr. Peter Nthumba said Ahmed died late Wednesday of intestinal bleeding that may have been caused by an ulcer or stress. Nthumba operated on the boy Monday in the Kenyan capital.

Relatives and well-wishers said they were shocked by the sudden death of Ahmed, a cheerful child who liked playing with a toy helicopter and spent time reading the Koran in his hospital bed. Doctors said the operation had gone well. His heartbroken mother, Safi Mohamed Shidane, said that she had not expected her son’s life would end. “I was hoping to pick up a healthy son, who can breathe through his nose like others,’’ Shidane said as tears ran down her cheeks. “But God said otherwise. It is God’s will. Today I’m collecting his body.’’

Somalia’s capital sees nearly daily bloodshed as a powerful insurgent group with links to Al Qaeda tries to overthrow the fragile, UN-backed government. Last year, his mother told AP that a barrage of bullets poured out from the presidential palace Sept. 24 and that one struck her son as they walked home from a Mogadishu market. Unlike Afghanistan and Iraq, there are few images of the bloodshed in Somalia, where thousands of children have been casualties without the world knowing. Most foreign journalists stay away because of the danger.

I'm sorry, but THAT LAST BIT is a COP OUT, and I AM ALWAYS ASKING ABOUT THEM!!

Btw, whatever happened to the pirates? Notice they have been missing from the MSM lately?

An AP photographer was present right after Ahmed was shot and took pictures of the bleeding boy as he was carried away by two bystanders. During the weeks that followed, AP journalists kept in touch with Ahmed and his mother.

Oh, that's why this boy was a worldwide story.

Last year, Kijabe Hospital doctors did what they could to stitch together parts of his face and recommended further specialized surgery to restore his nose and reconstruct the upper lip and damaged cheekbone. On Monday, Nthumba removed skin from Ahmed’s left hand and leg and stitched it where his nose once was, as part of a series of operations to restore his face.

The doctor had been planning to discharge Ahmed from the intensive care unit Thursday, but the previous day, the boy suddenly suffered massive intestinal bleeding that was not believed to be a complication of the surgery, Nthumba said. “Within 30 minutes the boy collapsed and we could not resuscitate him,’’ he said.

“It is another tragic loss of life for a young Somali,’’ said Katherine Grant, a child protection specialist with the UN’s children’s agency. Ahmed, who leaves his parents and two older sisters, was buried in a Muslim cemetery in Nairobi. His mother says she will return soon to Somalia, where one child in 10 dies before his or her first birthday, the UN says.

Labels: Africa, MSM, Somalia
Newer Post Older Post Home
WARNING for European visitors: European Union laws require you to give European Union visitors information about cookies used on your blog. In many cases, these laws also require you to obtain consent. As a courtesy, we have added a notice on your blog to explain Google's use of certain Blogger and Google cookies, including use of Google Analytics and AdSense cookies. You are responsible for confirming this notice actually works for your blog, and that it displays. If you employ other cookies, for example by adding third party features, this notice may not work for you. Learn more about this notice and your responsibilities.
"This site may contain copyrighted material the use of which has not always been specifically authorized by the copyright owner. We are making such material available in our efforts to advance understanding of criminal justice, political, human rights, economic, democracy, scientific, and social justice issues, etc. We believe this constitutes a 'fair use' of any such copyrighted material as provided for in section 107 of the US Copyright Law. In accordance with Title 17 U.S.C. Section 107, the material on this site is distributed without profit to those who have expressed a prior interest in receiving the included information for research and educational purposes. "